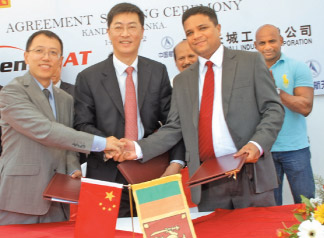 The foundation stone for the proposed Space Academy of SupremeSAT was laid at the Kandy BOI zone yesterday by visiting Vice Minister of Industries and Information Technology, People’s Republic of China, Chen Qiufa together with top Chinese executives. The project is a joint venture between SupremeSAT (Pvt) Ltd – The first and only satellite operator of Sri Lanka, in partnership with China Greatwall Industry Corporation and Sino Satellite Communications Company Ltd. The total investment would be around US $ 60 million. This is also the first Chinese investment for the Kandy district. The Academy would offer On the Job Training for Sri Lankans who could interact with the already co-branded satellites of SupremeSAT/Chinasatcom as a preparatory measure to be geared to handle the fully owned satellite of SupremeSAT which will be launched in December 2015. This investment would give confidence to other private sector companies in the world to invest in Sri Lanka, said R. M. Manivannan, Chairman of the SupremeSAT. The construction of the facility would be done in an accelerated manner with an ambitious plan for completion within six months to keep in line with the growing satellite business of both SupremeSAT and China Greatwall Industry Corporation. In addition, another historic investment agreement was signed between The Supreme Group and Beijing Aerospace Great wall Minerals Corporation wherein the mineral reserves held by the company regionally was assigned to the Chinese company for mining as well as future reserve enhancement purposes. The Supreme Group will enhance the mineral reserves of BAGWMC utilising it’s existing mineral reserves as well as acquiring larger reserves of all types of natural resources in Sri Lanka and in the region inclusive of Indonesia and Madagascar where the company has secured valuable coal mine reserves. Vijith Pieris – CEO of The Supreme Group and Liu Donghu General Manager of Beijing Aerospace Greatwall Minerals Investment Corporation signed the second investment agreement.